Showing posts from October, 2015
Show All

Zafferana Etnea ... an abundance of Honey 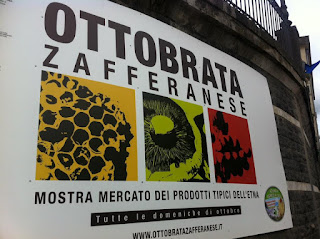 Ottobrata ... every Sunday every October Zafferana Etnea is a pretty town on the slopes of Mount Etna and is one of the last towns before you reach Rifugio Sapienza – Etna Nord , the Northern gateway to the summit of the volcano. The atmosphere is very peaceful and slow with comfortable temperatures even in summer due its height 600 metres above sea level. It is well worth a stop when visiting Mount Etna as the route up to Etna Nord passes close by the town.  In 1992 an eruption threatened to reach some local houses, the faithful residents of Zafferana gathered up the town’s statue of Our Lady of Providence which dates back to the 18 th Century and marched with it ahead of the lava flow and miraculously the flow stopped. In Piazza Umberto I the statue is preserved in the cathedral. Cathedral of Zafferana Etnea Across the square is a vantage point which overlooks the town’s public gardens full of exotic trees and beautiful fountains. From here the view is unique,
Read more 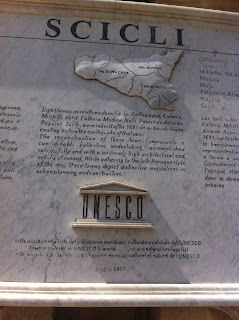 Sicily is the Italian region with the highest number of UNESCO World Heritage sites. Ten of these sites can be found in Eastern Sicily, the list includes; Siracusa, Noto, Ragusa, Caltagirone, Modica, The Necropolis of Pantalica, The Villa Romana del Casale, Catania, Mount Etna and Scicli. Off the beaten track, Scicli is a small town located in the province of Ragusa and is one of the most beautiful in Sicily. Rebuilt after the earthquake of 1693, Scicli combines open tree lined piazzas, churchs and baroque palazzos with decorative facades. The town is surrounded by high rocky cliffs where there is a castle that protects the town. The city’s origins date back to 1500BC.  Scicli was dominated by the Arabs and was recaptured in 1091, the year of the Norman victory over the Saracens. After the earthquake the town was reconstructed and moved further south between three valleys. Being listed as a UNESCO Word Heritage Site, Scicli has several monuments that are wort
Read more
More posts